Among the angel realm there exists a definite angel hierarchy. Described below are the most commonly seen orders, as well as the divisions, angel hierarchies and functions. Many angels have duties within multiple triads and can appear in several choirs within the hierarchy. For clarification, the word “angel” is often used as both a generic term to describe all heavenly beings, as well as a term to describe those members closest to humans and the physical world. The same is true for the term “archangel,” which is commonly used to describe all of the higher beings within the heavenly realm, as well as a term to describe those in the realm charged with carrying God’s messages to humans. 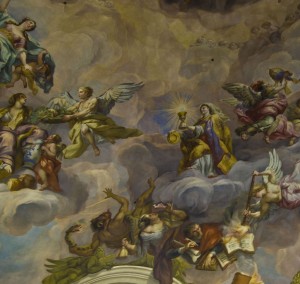 So as not to disrespect any religious traditions or spiritual beliefs, Psychic Library has chosen not to specify the names of the angels assigned to each division. In our research we found that there were many variations among the numerous religious and spiritual beliefs about their names and duties.

For more information about angels and spirit guides, visit the Angel Room.