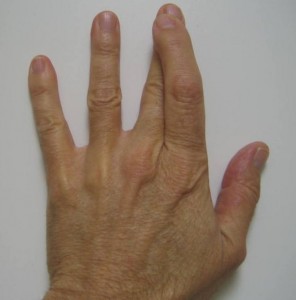 Crossing two fingers (the middle and index finger) is a very common superstition.? It is mainly done to ensure good luck and prosperity or to give courage and support to yourself or another individual. For triple good luck some people cross not only their fingers, but their arms and legs at the same time.

Some theories indicate that the origin of crossing the fingers dates as far back as the fourteenth century.? In the pre-Christian era, crosses symbolized power and unity (for example, the Solar Cross, although there were many other variations of crosses at that time), and the middle of the cross represented all that was good. People made wishes on the mid-point of the cross to ward off evil so that nothing would get in the way of the wish they wanted to fulfill.

It is also possible that during the Hundred Years? War, between France and England, before an archer would draw back his bow, he would cross the same two fingers that he would use on the bow to pray for good luck.

Before Christianity was legalized, making the sign of the cross to another person was also used as a sign between two Christians to identify each other, not unlike secret Fraternity handshakes of today. They may have also used both hands to form the sign of the fish, which also symbolized Christianity.

Today, crossing your fingers for luck is universal to many cultures and not just to Christianity. However, sometimes people cross their two fingers behind their backs to absolve themselves when they tell a lie and to ask God for forgiveness at the same time. Also the crossing of the fingers has a part to play in the walking under a ladder superstition. It is believed that if you accidentally walk under a ladder, must keep your fingers crossed to ward off any evil coming your way.