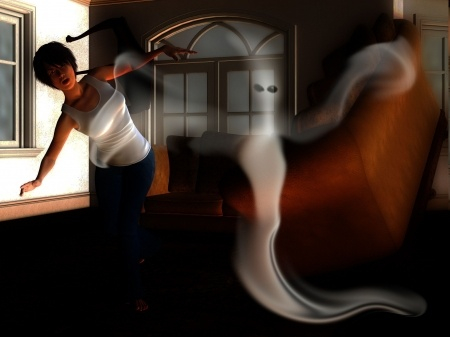 Physical mediumship is quite different from mental mediumship. A physical medium, while in a trance state, produces physical evidence of connections with the spirit world to observers in a dimly lit room, during a s’ance, or psychic circle, through the following phenomena: transfiguration, direct voice, apports, levitation and the movement or throwing of objects, knocking, rapping and tapping, spirit lights and materialization. A mental medium, or as more commonly referred to, a psychic medium, connects with the spirit world by harnessing visions, images, messages and energies from the spirits and then in turn, relaying them to the person who is receiving the reading. The mental medium is able to give factual evidence about those who have passed, such as specific names, places, detailed descriptions and how they died, without having had any prior knowledge. The individuals receiving this type of reading will confirm the connections made with the spirits and the accuracy of the personal details.

Historically, physical mediumship had its heyday during the late 19th and early 20th centuries. The Fox sisters, Kate and Maggie, popularized this type of mediumship in the U.S. after demonstrations of their mediumship skills at their home in Hydesville (Arcadia) New York in 1848. They reportedly received messages and communicated with spirits by way of rapping or tapping sounds, among other physical evidence. The sisters are credited by some as being responsible for the start of the Spiritualist Movement. Controversy surrounded the Fox sisters and many people tried to disprove their abilities. In later years, they admitted to fraud; however, they took back that statement and continued on with their physical mediumship work.

Another point to be made here is that differing theories exist as to how these phenomena occur. An extremely controversial theory and one that is still under much skepticism, is the belief that a substance called ectoplasm is the catalyst that a spirit uses to communicate messages through the physical medium and the sitters, or for making objects move. Ectoplasm is purported to be milky, vaporous or gauzelike and is emitted from orifices on the physical medium. Keep in mind that many hoaxes have been exposed surrounding the existence of ectoplasm. Physical mediums have been known to swallow some type of gauze material and then at an opportune moment, regurgitate it. Also, it is said that ectoplasm is super sensitive to light and must be created in a dimly lit space. However, there have been some accounts of ectoplasm that cannot be disproved.

Listed below are the more common phenomena that take place during a physical mediumship reading and are used as direct evidence of an afterlife and communication with those who have passed on to the spirit world.

Transfiguration is a phenomenon in which the psychic medium takes on the appearance of the spirit. What is seen might be only a particular characteristic of the spirit, e.g., a style of moustache, a hairstyle, specific hat or sometimes a whole body transformation is witnessed.

Direct voice is a way in which the physical medium allows the spirit to audibly communicate through him or her to the sitters receiving the reading in the physical realm. At the onset, the speech coming through the medium may sound garbled and hard to understand. As the energy builds, the voice of the spirit becomes much clearer. Sometimes, a cone-shaped device known as a trumpet is used to facilitate the communication. It often flies around the room and the spirit positions it next to a person the spirit wishes to speak with.

Apports occur when a spirit wants to materialize an object to people during a s’ance or at any other time when it wants to grab someone’s attention. These apports appear out of nowhere and can be quite startling to the onlookers. The objects can be just about anything, e.g., coins, jewelry significant to the person, etc.

Levitation is the phenomenon of an object or person floating in mid-air, defying gravity, with no visible support. The spirit, medium and sitter energies are known to create a ripe environment for this to happen. Sometimes objects are thrown and moved across the room.

Knocking, rapping and tapping are common phenomena that are typically experienced during a s’ance or when sitters gather around a table. It can sound like a soft tap of the fingers to a loud bang on the table. The physical medium can establish a code for the raps to allow the spirit to communicate “yes” or “no” answers to questions posed or to spell out actual words.

Spirit lights are flashes of light balls or orbs, commonly appearing in the colors blue, white or red. They represent the spirit energies and it has been stated that the brighter the spirit light, the higher the vibrational energy. This can indicate how evolved the spirit has become.

Materialization and Dematerialization are the appearance and disappearance of the full form of a spirit as it was in the past or as it is now in the spirit realm. It has been reported that the spirit actually walks, sits or touches the sitters in the room or around the table. Through direct voice it is also able to speak directly to them. To begin the process, sometimes the physical medium will sit in a draped area known as a cabinet to facilitate and draw in the energies of the spirit. The spirit materializes via the physical medium (some people believe this is accomplished using ectoplasm) and becomes visible to the group. It is also believed by some people that the spirit remains attached to the medium by way of a cord of ectoplasm.

Physical mediumship is not practiced much today. One reason might be that these phenomena brought on quite a bit of skepticism, as well as the exposure of many fraudulent physical mediums. Seances are still popular today, and the necessity of a physical medium is no longer a requirement. People have turned more to mental mediumship, psychic mediums, and evidential psychic mediums ? to assist in their connections with the spirit world.