Superstitions date back to early man’s attempt to explain Nature and his own existence. There was a deep belief that animals, nature and objects held a connection to spirits and the spirit world. In order to have a feeling of appeasing these forces, different behaviors or customs arose that would dictate a favorable fate and good fortune. Many superstitions have come from mythology, where omens were common.

Superstitions live on because they have been passed on from generation to generation. Even today, where direct evidence and facts outweigh superstitious beliefs, there are probably very few people who can categorically deny that they do not at least secretly harbor a slight belief in one or two superstitions. Below are the new additions to the Superstition Room.

The superstition of bad luck surrounding breaking a mirror has existed long before metal or glass mirrors were actually invented. Before these types of mirrors were produced, reflections of one?s self were seen in rivers, ponds, pools or bowls. If the reflection looked distorted, it was believed that disaster would strike. In fact, an ancient Greek divination, called catoptromancy, used shallow bowls filled with water to tell a person?s future based on the reflection revealed. One?s reflection represented an individual?s soul. Distorting a mirror, glass or water-filled bowl damaged the reflection, and thus, the soul.

The ancient Greeks, Hebrews and Egyptians produced mirrors made out of silver, gold, brass or bronze, which were unbreakable. These early mirrors were considered extremely valuable and possessed mystical attributes.

Almost universally, this superstition includes that the bad luck would last for seven years. The origin of this belief stems from an early interpretation in Roman times that each person?s body undergoes a physical regeneration every seven years. A broken mirror signified a break in the person?s health and well-being, going back to the theory of the mirror being the reflection of the soul.

In 15th century Venice, Italy, when glass mirrors backed by silver coating were first produced, they were prohibitively expensive. Servants of the wealthy, who most often would be in the position of cleaning or moving a mirror, could never afford its replacement, if broken. The punishment or threat of breaking a mirror became that of having to serve for seven years as an indentured servant to the mirror?s owner.

During the mid-1600s, when England and France were finally able to manufacture mirrors inexpensively, the superstition about bad luck and broken mirrors was already solidified in the culture.

It is noted that one way to avoid the bad luck associated with breaking a mirror is to take the broken pieces and bury them underground and under the moonlight. 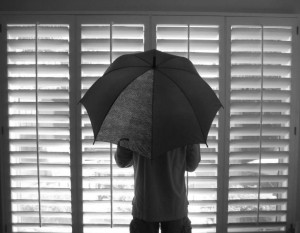 It is still believed by some that opening an umbrella indoors will bring bad luck. The origins of this superstition are not totally agreed upon, but some say it can be traced back to the early Egyptians. Back then, umbrellas protected people (mostly nobility or religious leaders) from the heat of the sun, not from the rain and was thought to ward of spirits who might do them harm. To open one inside or even in the shade would offend the God of the Sun.

It was also believed that the goddess Nut enveloped the sky like a huge umbrella. The beautiful man-made umbrellas were fashioned with peacock feathers and papyrus and represented the goddess. Because of their religious significance, they were usually held only over the noble classes. The shadow that surrounded the person underneath the umbrella was considered sacred, and if someone other than the nobility stepped on this space, it was considered sacrilegious. Oddly enough, the Babylonians considered it an honor for anyone to step into the shadow of a king?s umbrella shade.

Others believe that the bad luck associated with opening an umbrella indoors came to be in 18th century London, the time when waterproof umbrellas with metal spokes were popularized. These umbrellas were awkward to open and were extremely large in size, which could cause injury to people or break objects if opened inside a house or in a small space. This could cause anger or arguments among family or friends, which was considered bad luck, or at least something to be avoided.

Another variation on the superstition is that if rain is predicted on a given day, take an umbrella with you and it will not rain. And if you leave the umbrella behind, it will definitely rain.

It has also been noted that bad luck does not occur if the umbrella has first been opened outdoors and then brought inside to dry. And that bad luck is associated with an umbrella if it is the color black, was given as a gift, has never been used outside in the rain, is opened on a ship, or is dropped on the floor.

Walking Under a Ladder 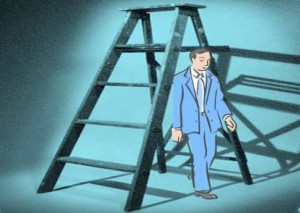 The superstition associated with walking under a ladder is that it will bring you bad luck. One origin of this superstition dates back to medieval times, in which the ladder symbolized the gallows ? a place where persons were hanged. So when someone walked under a ladder, it was believed that he would surely face his own death by hanging. And because people were hung at the top rungs of the ladder, it was thought that their spirits resided within the triangle that was formed by the leaning ladder, in other words, it formed a haunted area. Ladders were typically leaned up against the gallows and used to assist the person in charge of removing the dead bodies. By walking under the ladder during that time, it was assumed that a dead body could fall on you, causing injury or death.

Another origin of this superstition dates back to ancient Egypt. The Egyptians believed strongly in the power of the pyramids. Even a ladder leaning against a wall symbolized a pyramid because of its triangular shape. If someone walked under it, they believed that the power of the sacred pyramid was broken.

Yet another early belief about ladders was that when leaned triangularly against a wall, it signified the Holy Trinity ? the Father (God), the Son (Jesus) and the Holy Ghost (the spirit of Jesus). The action of walking under the ladder was considered blasphemy and a desecration of God. Additionally, it would invite the devil in.

There are ways to undo the seemingly disastrous consequences. By walking back through the ladder, you can undo the harm and secure a second chance of better luck. Also, crossing your fingers until you see a dog can fix the situation.

The best belief is common sense. Jarring a ladder in any way might cause you to get hit by a falling object, or cause someone already on it to fall off. It is best to walk around it to ensure a better day. If you choose to walk under one, use the crossing fingers method stated above.

To find out more about superstitions, visit the Superstition Room.