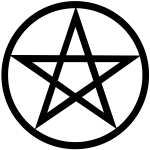 Wicca is a neo-pagan religion that evolved from pre-Christian traditions in Ireland, Scotland and Wales. The discovery of cave paintings from more than 30,000 years ago points to the idea that Wicca is actually much older. The religion is based on an awe-inspiring appreciation of Nature and that the spirits of the One, Goddess and God exist in all things – nature’s creatures, trees, flowers and oceans. Everything on Earth is divine.

Many forms and branches of Wicca exist, but Gerald Brousseau Gardner is most often credited as its founder. In the early 1950s he claimed that he was a part of an ancient witches coven in Southern England and his writings about witchcraft became the cornerstone for the development of Wicca throughout the world.

Contrary to what has been popular belief, Wicca has nothing to do with Satanism or evil. Throughout history, witches have been unjustly hunted, chastised and murdered. During the medieval period, there were many myths about witchcraft (all evil) and that connotation carried over for centuries. Even in the early years of the American colonies, a lie turned into the Salem witch trials.

In May 2007, the U.S. Veteran’s Administration allowed (after an approximate 10-year delay) the pentacle to be placed on the headstones of fallen Wiccan and Pagan soldiers. And the U.S. military does recognize Wicca as a religion – people practicing the religion are allowed the same religious rights as people of other faiths.

Wicca rituals, spells and magic are done for good and the benefit of the whole. Magic is used by Wiccans to bring positive change to the world and its people. Their belief is to do no harm, yet protect them from negative or evil influences. It is believed that any action performed, either good or bad, will manifest itself three times greater, giving way to a boomerang effect. This is referred to as the Law of Three. The magic and spells are also used for healing, fertility, love and creativity.

The most common symbol is the pentagram, which symbolizes the five elements of Wiccan beliefs: air, earth, fire, water and spirit. Wiccans have a tremendous respect for the earth and the elements. They acknowledge changing of the seasons, the lunar phases and cycles of nature to gain spirituality and worship the divine. Most Wiccans celebrate a cycle of festivals throughout the year, called Sabbats or Sabbaths. There are eight of these celebrations and are collectively known as Wheel of The Year. They are separated into six or seven weeks, which correlate with the seasonal cycles of the earth.

Groups of witches are called covens (formal groups) in which they practice their rituals and traditions. The traditions and teachings of the Gods and Goddesses are passed on to its followers using a system made up of three degrees. The first degree is for those newly coming into the Craft. It is what is considered an initiation period. The second degree marks the beginning of taking a deeper path within the teachings. The third degree is granted to those who have gained the knowledge and have obtained the status of elders within their covens. They have become a High Priestess or Priest. 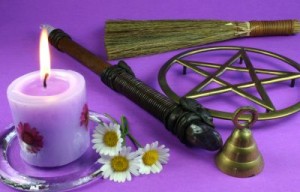 Ritual tools are sometimes used by Wiccans. All of them have a tie to either the elements or the Gods when working their magic. Each tool must be consecrated and blessed. Listed below are some of the tools, their purpose and what they symbolize.

Paton – An altar consecration tool. It is usually inscribed with a pentacle. The Paton is symbolic of the element of earth. It is often a bowl or plate.

Sword and Athame – Associated with the element of fire; however, in some Wiccan traditions, it may represent air.

Wand – Symbolizes masculine energy and is associated either with fire or air. The wand may have a less aggressive quality than the athame or sword.

Chalice – Or goblet. Symbolic of the element of water and represents the womb of the Goddess.

Cingulum – Translates as girdle or belt. It is usually a purple cord worn around the waist; however, different colors may signify different degrees of learning.

Most Wiccans have a Book of Shadows that contains their coven’s sacred writings of magic spells, practices, rituals and beliefs. There are also many other tools and jewelry that are used or worn to represent the Gods, Goddesses and elements.

TO LEARN MORE ABOUT OTHER TOPICS AND SPIRITUALITY, VISIT THE LEARNING ROOM.