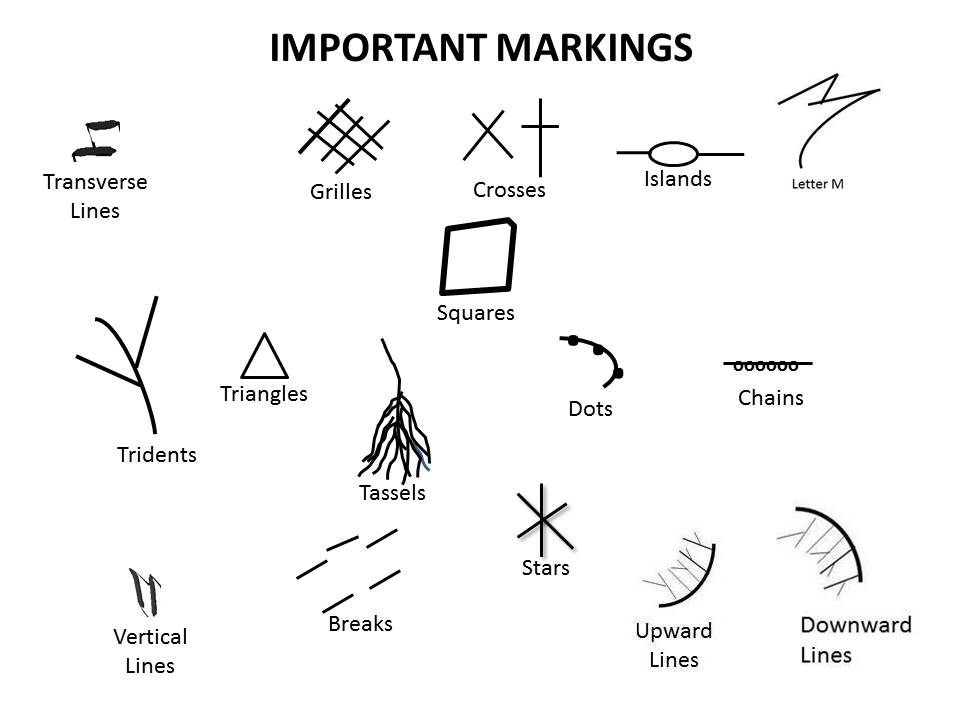 Palmistry markings are positive or negative interruptions and blockages in the normal flow of the palm lines, mounts and fingers. They can indicate warnings of difficulties, separations, traumatic events or health problems. Some markings may indicate a period of recovery, problem resolution, or an emotional healing period. However, their meanings are dependent upon where they are located on the palm, as each area on the palm represents a different part of your life. They can also enhance or diminish the energies from those areas. Listed below are the important markings that can appear on the palm of the hand, along with their general meanings. Here you will find: breaks, chains, crosses, dots, grilles, islands, squares, stars, tassels, transverse lines, triangles, tridents, upward and downward lines and vertical lines.

Breaks in the major or minor lines can represent both positives and negatives, depending on which way they lie from the various lines. Breaks going toward the thumb can indicate a new direction in a career. Breaks going in the upward direction toward the edges of the hand suggest an unexpected journey. If they are pointing to the base of the palm this can mean an unexpected turn in your daily routine. These breaks can indicate that there is an interruption in one?s normal flow of energy or signify a redirection in one?s life path.

Chains denote the many different obstacles one may face in life. They can signify a difficult or not so privileged upbringing. Also, they may relate to experiences in a person?s love life. Chains are also representative of times of indecisiveness. They can also indicate problems in the area of health. The length of the chain correlates to the duration of time that all of these issues may last.

Crosses are an indication of long-lasting problems. They also represent changes in one?s life. Depending on where they appear on the palm, they can be an indication of positive or negative changes. They might even be sign that adversaries may want to cause harm to the individual. They may also represent outside influences that may be causing stress. They can be indicators of how one is handling their spiritual side of life and mental state of being.

Dots are not always well pronounced on the palm ? they can be very tiny. Dots can represent concerns about ill health, relationships or another type of destructive experience.? They can also represent significant and monumental events that have created crisis in a person?s life. They might also be warning signs of danger in an individual?s life?s path. Dots have been known to disappear when unfortunate circumstances and issues are solved.

Grilles appear most often on the mounts. They signify negative indications and represent problems and adjustments. A grille on any part of the palm disperses energy. A grille may represent bewilderment and insecurity at times in one?s life. Grilles signify interruptions in a person?s advancement. They can also signify beginnings or hindrances, with respect to life’s ventures. One may also be continually exhausted by various anxieties and annoyances.

Islands indicate interruptions in life that are not favorable. Usually, they indicate stressful periods, either brought on by a career or someone causing one mental stress. They can also indicate fearfulness and weakness in health, in particular, inherited heart disease or a disturbance of one?s energy. It is important to look closely at the island to be sure that it does end and the lines continue.

The letter “M” in palmistry is a rare but recognized marking. It is when the major lines cross over in the center of the palm. It is formed by the heart line, head line and life line. This is believed to be good fortune bestowed on the individual. Also, it is an indication of a person with good intuition. People who have this marking are also known to be trustworthy, and they make generally good companions and business associates.

Squares are usually a positive sign on the palm and indicate protection, especially when they appear around line breaks. They can symbolize good luck from outside forces, for example, one?s guardian angel. At times, a square can represent a time of being boxed in or imprisonment if it rests on a line that has no break in it.

Stars on the palm usually indicate success and good fortune in the area they appear. However, a star appearing on the life line can represent turmoil. If a star is found at the end of a line, it can indicate fame, notoriety and great accomplishments. It can also indicate success in one?s relationships. When found in some areas, the star can signify misfortune. It can also signify emotional problems and lack of confidence in one?s career.

Tassels, also known as frayed lines, when found on the palm indicate confusion or chaos about a particular situation or problem. They can also indicate a physical, emotional or spiritual decline. It is often found at the end of the life line as an individual ages.

Transverse markings are negative symbols. They take away the strength and deplete the positive energy of the line or mount they are found on. They create obstacles wherever they appear. It may also indicate that an individual may be using their skills for ill intentions.

Triangles are very lucky markings and indicate success. They signify that the individual has an ability to analyze situations effectively and has the brainpower to accomplish many things. When they appear on specific lines, they strengthen the qualities of that line. They can also be symbolic of someone who is spiritual or psychic.

A trident on the palm is a very lucky marking. It always increases the qualities of the lines or mounts it appears on. It can even have a positive effect on the neighboring mounts. It is believed to bring good fortune in threes and the person will be happy, healthy and wealthy in life.

The upward or branched lines can indicate that an individual has overcome some of life?s roadblocks through his or her own determination. They indicate someone who will be successful and achieve their goals. They can also indicate hopefulness and a good outlook on life. There is an idealistic and positive attitude associated with these lines.

The downward or branched lines can represent times in which a situation has gotten out of control for the person. They can indicate pessimism, unhappiness, negative energy and losses. They can also signify someone who does not think in a positive way. Depending from which line the downward lines appear it lessens the strength of that line and drains its energy.

Vertical lines are usually good markings, representing positive energy. Do not confuse these lines with sister lines. Some people may have several vertical lines in different sections of the palm. They are an indicator of someone who could be in the health care profession. If they are found on the mounts or other lines, they lessen or neutralize any negative qualities that might be lingering. If they cut through a horizontal line, it is an indication that an individual has conquered trials and tribulations.

To learn more about Palmistry, visit the Palmistry Room.