A s?ance is a gathering of open-minded individuals for the purpose of communicating with a deceased person?s spirit. The group is lead by an individual with psychic medium abilities. A common setting is usually one in which everyone is seated at a circular or oval table that is draped in a colored tablecloth. The number of people present may vary, but a minimum of three is customary. The room is usually darkened and candlelight is used. Guests may bring objects that are associated with the deceased to encourage communication.

The psychic medium serves as the communicator, although people attending may experience physical feelings, smells and emotions from the spirit. Evidence of the spirit may come through as responses to questions, either in the form of a knocking noise or actual channeling through the psychic. Sometimes an unwanted entity may present itself. In that case, it must be asked to leave.

The term s?ance is derived from the French word for session or sitting. S?ances were most popular during the Spiritual movement of the 19th and early 20th centuries, during which time many of the current components of the s?ance were established.

In the mid-19th century, two sisters, Kate and Margaret Fox of Hydesville, New York, were frightened by mysterious knocking sounds. They attempted to find out the source of the noises. Kate asked the source, or spirit, to knock the same number of times that she snapped her fingers. The spirit did respond with the same number of knocks. She then moved on to asking it yes or no questions. Soon, other residents of the town began to witness this phenomenon.

The sisters moved to Rochester with Quaker friends and the phenomenon rapidly spread throughout that religious group. In 1850, they caught the attention of such notables as James Fennimore Cooper and Horace Greeley. Those s?ances were eventually exposed as being staged, but conducting them became even more popular among psychic mediums and they are still carried out today. 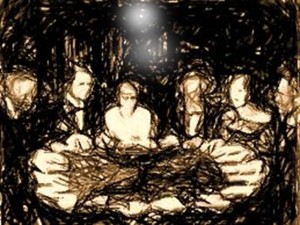 How To Conduct A S?ance

Assemble a group of three or more people, one of whom is a psychic medium. The medium leads the group, asks the spirit to join the s?ance and facilitates communication.

Sit at a round or oval table draped with a light colored tablecloth. Light colors tend to invite friendly spirits.

Place a food offering on the table that is aromatic in nature. These smells tend to fill the hunger some spirits have.

Use a smudge stick to cleanse the area of negative energies. Sage and sweet grass work well.

Before the s?ance officially begins, have a moment of meditation or prayer to help with protection and focus.

Burn candles, preferably three, as they create an inviting atmosphere. ?They give off enough visibility so that the spirit energies can be seen. It is believed that spirits are attracted to the heat and energy that comes from the candles.

People attending should join hands to form an unbroken connection with the group.

In unison, softly chant the deceased person?s name to contact the spirit.

Once the spirit is contacted, holding hands is optional.

Have a list of questions ready for the spirit, formatted for yes or no responses. Suggest that the spirit make one tap sound for ?no? and two taps for ?yes.? This type of communication is known as typtology. Another communication method used is alphabetical typtology, in which the spirit taps when it wants to draw attention to letters of the alphabet to spell out a particular word or phrase to the group. Along with the tapping sounds, slight movement of the table itself may be noticed.

A light unexplained breeze or flickering candles indicate that a spirit is present.

If the psychic medium seems to be falling asleep or going into a trance, do not disturb him. This is the beginning of channeling. The spirit may choose to speak through the medium.

When finished, thank the spirit for coming. It is important to ask the spirit to return to the spirit world and to go in peace.

Blow out the candles and give a short prayer of thanks. This is the best way to end your s?ance.

TO LEARN MORE ABOUT OTHER FORMS OF READINGS,
VISIT THE READING ROOM.