The Mounts of Mars are located in three areas of the palm. They are an indication of one?s ability to deal with confrontation and have been equated to the fight or flight instinct. There are many similarities between the Upper and Lower Mounts of Mars; some that are positive and some that are negative. Some palm readers only address the Upper and Lower mounts, however, others include the Plane of Mars in their readings. 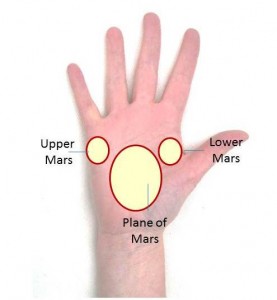 The Upper Mount of Mars, or Positive Mars, is positioned between the Head Line and the Heart Line, below the little finger. It reflects temperament. An overly developed mount denotes a stubborn, defiant individual who is not one to enter into a give and take situation. If this mount is absent or flat, this is a sign of one?s inability to express true feelings. There is an inability to avoid confrontation and anxiety provoking environments. If it is normally elevated, the individual has strength and is courageous, well balanced and healthy.

The Lower Mount of Mars, or Negative Mars, signifies an individual?s enthusiasm or aggression. If it appears overly developed, this individual may be quick tempered, over indulgent, egotistical and argumentative. When it appears under developed, absent or flat, it can indicate that a cloud of uncertainty surrounds the individual. There is also a lack of self-esteem and getting motivated is difficult. This is also a sign of one?s inability to express true feelings and having a tendency to withdraw when uncertainty is there.

The Plane of Mars, which is located in the center of the palm, is also known as the Middle Mars Plane. An undefined Plane of Mars shows a highly self-centered person. This person can also display temper tantrums. A thick, well-developed, and firm Mars plane indicates a highly energized person and a sociable individual. However, there can be a negative side to this ? it may also be an indication of a rebellious individual who has no regard for the law or others. If the Plane of Mars has a dip in it, the person has a calm and patient temperament.

To learn more about the other Mounts, click here.

To learn more about the basics of Palmistry and the meanings of the markings, visit the Palmistry Room.