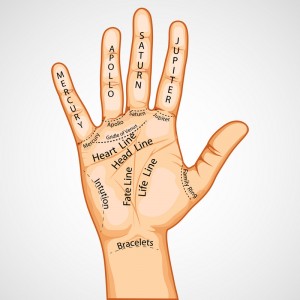 The palmistry minor lines, or secondary lines, can reveal an individual?s talents, interests, strengths and weaknesses. Their meanings can vary, depending on the hand shape, markings, mounts and the other lines nearby or crossing over them. Minor lines can be very faint or may not even be apparent, which is fairly common. If they do appear on the palm, they will give the palm reader a lot more insight into the subject. Listed below are six of the more common?minor lines and their general meanings ? fate line, apollo (sun) line, bracelet (rascette) lines, relationship (marriage) lines, health line, girdle of venus and intuition line.

The Fate Line is also known as the Line of Destiny. This line indicates the impact and affect that other individuals and events beyond one?s control have had on an individual.? This line is tied to one?s life path. It is also an indication of obstacles that may be faced, educational and occupational choices, accomplishments, achievements and how content an individual is with his life. The line also can indicate that elderly family members might be very controlling and one?s own needs and wishes are being neglected. This line also denotes a personality that can be strong, however, it may indicate struggles that may get in the way of success. If there are breaks in the line, hard luck, loss or failure in life can happen.? There might be a double or sister line and this signifies a very successful and prominent career, even a renowned one.

The line of Apollo, also known as the Line of the Sun, when present, is an indication of success in one?s life. This line can indicate creative, self-confident individuals who are extremely capable of following through on a plan of action.? They can communicate their ideas well and are sensitive, which makes them primed for success and good fortune. However, the line may not be continuous, due to the fact that life is not free of difficulties.? This may be a sign of inconsistencies in one?s life. If this line does not appear on the palm, it does not have any correlation to one?s success or failure. Markings on this line can indicate times of illness or setbacks. (See Palmistry Markings.)

The Bracelet Lines, also known as Rascette Lines are located at the base of the palm on the wrists. The majority of people have three bracelet lines, however, some lucky people have four. Four lines is an indication that one may live to be close to 100 years of age. The lines can reveal a person?s longevity, health, destiny, prosperity and the balance or imbalance of the mind, body and spirit. The more solid and unbroken the lines, the better the chances are for a good healthy life.

The Relationship Lines, also known as Marriage or Love lines, may be one or several, and do not only indicate marriages or partners, but relationships that are significant in one?s life. It indicates one?s ability to handle relationship commitments. If the lines are well defined and longer, that can indicate a person has the ability to make long-term commitments. Shorter and weaker lines can signify relationships that may not last or ones that may end for a time and begin again. A fork at the end of the lines might signify a divorce.

Children lines vertically cross the relationship or marriage lines. They are often very faint. Each line can indicate a child or a potential one. The lines can also reflect an individual who might care for children throughout life, e.g., as a teacher, a counselor or even as a foster or step parent.

Some palm readers interpret broader children lines to indicate males and narrower lines to indicate females. Also, clear lines indicate a healthy child; longer lines than the others indicate a child who is a favorite of the parents; uneven or barely visible lines indicate a sensitive child and if that line begins with an island, it represents a child who will have ill health in the early years. When a child line does not cross the relationship line, it could indicate that a child may come into a relationship later on.

Some palmists say that to find out the number of children you will have, count the vertical lines from the outside of the palm toward the inside.

The Line of Health is also known as the Line of Liver, and is an indication of one?s health and overall well being. It can indicate the health of the nervous system, liver and kidneys. People who have the ability to heal others physically, emotionally or spiritually may possess this line. Keep in mind that if the line appears broken or frayed, it can be an indication of possible illness or those illnesses that have come and gone. Also, it may denote illnesses in partners who are close to you.

The Girdle of Venus can indicate a wound-up and nervous person. These individuals can experience extreme highs and extreme lows. People with this line also may crave excitement and be highly sensual in nature. It also can represent an individual who needs to keep his temper in check. It also can indicate a person with deep sensitivities.

The line of intuition on the palm signifies individuals who are able to read other people and situations instantly? they are highly intuitive. This line is often very apparent on psychic sand psychic mediums. Due to their sensitivity, these individuals may have difficulty in a crowd, as they are sensitive to other people?s positive or negative energies. If the intuition line is broken, it may indicate that the individual is overly empathetic and should be careful of their health.? If the line is not well pronounced or absent, it does not mean that the individual is not intuitive or even psychic. He may have a psychic hand shape, which is another indicator of psychic abilities.

A very rare line, the Simian Line appears instead of a heart and head line. In other words, the heart line and head line are conjoined to form the Simian Line. This line is also called the simian fold or crease, or the palmer crease. Individuals with a Simian Line are usually stubborn minded. They are ruled either by their heart or their head. They view the world in black or white terms ? there are little, if any, gray areas. These individuals may have difficulty dealing with stress, or take things too personally. If there is a Simian Line on both palms, it can heighten its effects. Instead of viewing the Simian Line as a negative attribute, look at it as being an enhanced connection between one?s heart and mind. This line can bring about much success. However, on the flip side, it can, at times, have some bad connotations.

The Ring of Solomon, also referred to as the Ring of Jupiter, is located at the bottom of the Jupiter finger (index finger) on its mount. This ring can appear in a semicircle formation or in a straight line. It represents King Solomon from the Bible and Jupiter, the king of the gods during Roman times. People who possess this ring have strong leadership qualities and are usually found in positions of authority. They are well respected, intelligent and philosophical individuals who are extremely tolerant and thoughtful of others.

The Ring of Saturn is a semicircle-shaped line located at the base of the middle finger. This ring is not commonly found. The Ring of Saturn may indicate an individual who is unhappy, a hermit, overly serious in nature and not living life to the fullest. This person may be consumed with a pessimistic outlook on life. You may refer to this person as always being down in the dumps.

The Ring of Apollo, which is a very rare marking, signifies that a blockage exists in creativity. This marking might actually block the positive effects of the traits associated with the Apollo finger. If you have this marking, do not be discouraged. Some palmists believe that with a change to a positive outlook, focusing on creative projects and broadening your horizons, this line can dissipate.

To learn more about the basics of Palmistry, visit the Palmistry Room.