Telepathy, a form of extrasensory perception (ESP), is the direct communication between two living beings on a level that is void of written or verbal communication or the use of the five senses. One is considered the “sender” or “transmitter’, and the other is the “receiver”. Telepathy is not limited to humans. It occurs between animals and between humans and animals.

The term telepathy was coined in 1882, by Fredric W. H. Myers, one of the founders of the Society for Psychical Research. In the field of parapsychology, telepathy and forms of ESP fall under the category of psi-gamma. Telepathy is divided into three different types. 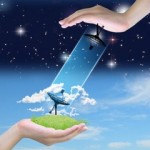 2. Mental – Communication and visualization occur between individuals without any physical media.

3. Emotional – Individuals may feel different levels of depression, excitement or fear, without explanation.

Studies have shown that twins from within the womb, in infancy and throughout adulthood have displayed these forms of telepathy.

In its earliest forms, telepathy appears to be instinctive. However, it can be developed further with practice. A widely used test for telepathy is done using Zener cards (five groups each of five like cards). Each card contains an image of either a circle, cross, square, star or wavy line. The 25 cards are shuffled and kept out of sight from the individual being tested. The subject is then asked to give the identity of the card. A scoring system of how many correct card matches made by the subject determines his/her level of telepathy. For example, a score of 10 correct out of 25 indicates some form of telepathy. A score over 10 correct shows a more significant level of abilities. The test should be taken several times to rule out that the answers were just by chance.

If you repeatedly test yourself with these cards, you can enhance your own telepathic abilities. Take the psychic abilities test provided below, which uses symbols, numbers and colors, and practice frequently.

Another way to practice the development of telepathy is to sit with another individual. One person acts as the sender and the other as the receiver. Both individuals need to become centered and grounded and clear their minds. They should sit back to back or across from each other at a table. The sender chooses either images or a deck of playing cards, or simply thinks of something. The receiver trys to determine which card, image or thought is coming from the sender. With practice, it has shown that many individuals can achieve a higher level of telepathy.